One of the best-known experimental novels of the 1960s, Beautiful Losers is Leonard Cohen’ s most defiant and uninhibited work. As imagined by Cohen, hell is an apartment in Montreal, where a bereaved and lust-tormented narrator reconstructs his relations with the dead. In that hell two men and a woman twine impossibly and betray one another again and again. Memory blurs into blasphemous sexual fantasy–and redemption takes the form of an Iroquois saint and virgin who has been dead for 300 years but still has the power to save even the most degraded of her suitors. First published in 1966, Beautiful Losers demonstrates that its author is not only a superb songwriter but also a novelist of visionary power. Funny, harrowing, and fiercely moving, it is a classic erotic tragedy, incandescent in its prose and exhilarating for its risky union of sexuality and faith. 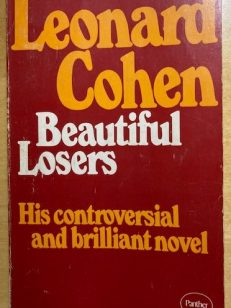